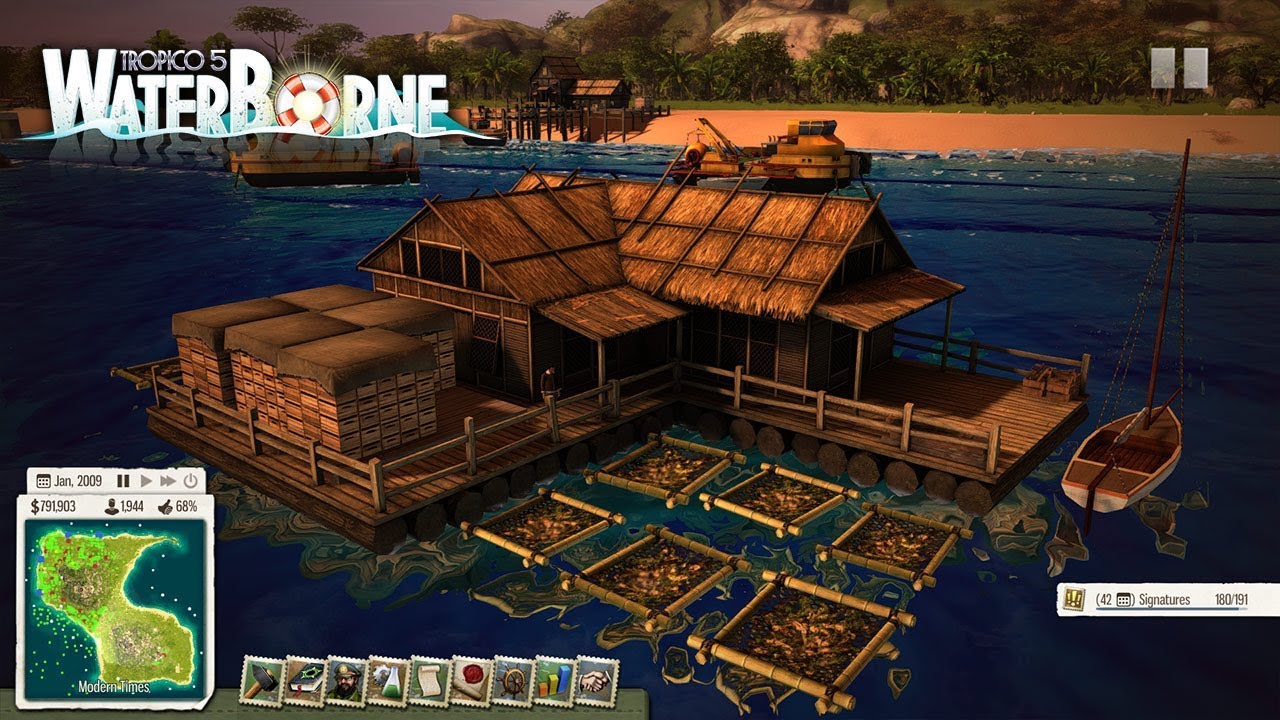 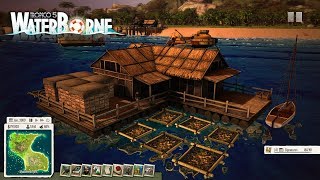 This content requires the base game Tropico 5 on Steam in order to play.

It’s time to get nautical - the future of Tropico lies on its shores! Harness the vast potential of the sea by constructing waterborne structures around your island. Build brand new off-shore alternatives to defence, food, energy, entertainment and even housing – which each come with their own set of opportunities and disadvantages. Organise and coordinate transport to structures like the kelp and oyster farms, construct tidal power plants as an eco-friendly alternative to nuclear power and build gorgeous floating apartments if you’re running out of space on the island! Launch military submarines to bolster your naval forces or create an exotic bathysphere attraction to compliment your bustling tourist paradise.

The ‘Waterborne’ expansion for Tropico 5 comes with a slew of new gameplay features and enhancements: such as water traffic, larger coastal areas and new events to keep even the most seasoned island rulers on their toes. An all-new campaign spanning 6 epic scenarios, new dialogue and story shows what marine life is all about in the waters of Tropico. Meet the beloved cast and crew of Tropico 5 once again and experience all-new wacky adventures, outrageous situations and enjoy the trademark cutting sense of political humour.

All the new content and off-shore gameplay mechanics work with existing sandbox maps and multiplayer modes.

Return to the remote island nation of Tropico in the next installment of the critically acclaimed and hugely popular ‘dictator sim’ series. Expand your Dynasty’s reign from the early colonial period to beyond the 21st Century, facing an all-new set of challenges, including advanced trading mechanics, technology and scientific research, exploration and for the first time in Tropico history – cooperative and competitive MULTIPLAYER for up to 4 players.

The Eras - Start your reign during colonial times, survive the World Wars and the Great Depression, be a dictator during the Cold War, and advance your country to modern times and beyond. From the 19th century to the 21st, each era carries its own challenges and opportunities.

The Dynasty - Each member of El Presidente’s extended family is present on the island and may be appointed as a ruler, a manager, an ambassador or a general. Invest in the members of your Dynasty to unlock new traits and turn them into your most valuable assets.

Advanced trade system and trade fleet - Amass a global trade fleet and use your ships to secure trade routes to neighboring islands or world superpowers, both for export and import.

Explore your island - Discover what lies beyond the fog of war. Find valuable resource deposits and explore the ruins of ancient civilizations.

All new art - All artwork has been re-designed from scratch to provide Tropico 5 with a unique visual identity. Choose from over 100 buildings from each of the individual eras.

Cooperative and competitive multiplayer – Up to 4 players can build up their own cities and economies on any given island map. Players can choose to share resources, supplies and population or declare war on each other.